How Do Bicycle Accidents Differ from Pedestrian Accidents?

National statistics typically group pedestrian and bicycle accidents together, often to highlight the risks of crossing the road in a busy urban area or rural region with poor visibility.

While bicyclists and pedestrians frequently share the same risks when crossing or riding alongside passenger vehicles, when and how individuals get hit by motor vehicles can vary.

Anyone riding a bike or walking to a destination should be mindful of these factors, especially when traveling through a congested area. 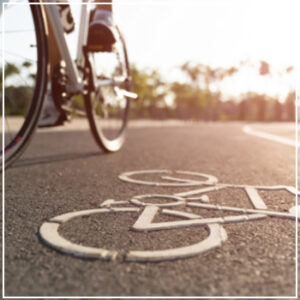 For pollution and noise reduction, many cities and municipalities have started encouraging bicycle use over the past 20 years. Yet, according to the Centers for Disease Control and Prevention (CDC), bicycles account for just one percent of all transportation trips in the U.S. However, 8,908 cyclists died from 2007 to 2018 across the US, per the Federal Highway Administration (FHWA).

This trend goes against traffic accidents collectively: While motor vehicle accidents as a whole have experienced steady year-over-year declines, pedestrian and bicycle accidents have seen a 20-percent uptick, with concerning increases in major cities like New York and Los Angeles.

According to the most recent available data from the Connecticut Department of Transportation, three people died and 437 were injured in bicycle-related fatalities in 2015.

Based on figures from the FHWA, where and how bicyclists get hit by cars and trucks have not changed since the 1970s. Then and now, the biggest risks involve riding through intersections and going across driveways as a vehicle is backing out.

The FHWA also reported that most bicycle accidents in the U.S. involve riders under age 15, while pedestrian accidents skew older. However, the FHWA found that bicycle riders aged 44 and older are more likely to experience a serious injury or be killed. Collisions with a car or truck are behind nearly 20 percent of all serious injuries and fatalities, regardless of the rider’s age.

Unlike with pedestrian accidents, where alcohol and drug use frequently play a role, these substances are only behind five percent of all bicycle accidents. Similarly, bicyclists are more likely to get into an accident in the late afternoon or early evening – times of high sun exposure, which can decrease visibility. By contrast, most pedestrian accidents occur later in the day. On the other hand, both pedestrians and bicyclists are more likely to get in an accident in an urban area.

Responsibility on the Road

Another significant difference between pedestrian and bicycle accidents, a cyclist is expected to follow the same rules of the road as cars, trucks and motorcycles. In turn, other vehicles should keep appropriate distance from a rider in the middle of a traffic lane and take care when making maneuvers.

However, there are some exceptions to this rule. Perhaps the most significant one, side-of-the-road rules require bicycle riders to move to the side of the road to stay out of traffic or use a bicycle path, if available. This rule generally applies in areas where traffic moves at a fast pace and a cyclist is unable to keep up.

At the same time, because of the issues bicyclists pose to pedestrians, many of the same municipalities also require bicycle riders to stay off the sidewalks, unless absolutely necessary.

The proximity of bicycles and motor vehicles in urban areas increases the likelihood of three types of accidents:

In most of these scenarios, the car or truck driver shares the majority of the responsibility for not sharing the road with bicycles, which is supported by the fact that bicyclists have a much higher likelihood of experiencing a fatal injury when hit.

Yet, bicycle riders are not let completely off the hook. From the time an insurance claim begins, you will be asked about where you were riding along the road, if you were paying attention to passing cars and if you obeyed all traffic signals.

This risk is particularly high in urban areas, as a bicyclist riding on the side of the road usually does so along a series of parked cars. Yet, the driver is expected to first check for bicycle riders in the area before opening the car door.

However, the bicycle rider may be found partially responsible if traffic is light enough that they can ride in the road away from the line of parked cars. To stay safe, bicyclists riding along the side of the road are encouraged to stay at least three feet away from parked cars and moving traffic.

The issues involving motorcycles and blind spots get amplified when bicyclists are in traffic. As bicycles are slower by nature, any car or truck wanting to go around the rider needs to change lanes and use their turn signal as they do. At the same time, because of heightened injury risks, all larger vehicles are recommended to maintain a safe distance whether behind or when changing lanes.

At an intersection, a car turning right should always look out for a bicyclist traveling straight in a bike lane or alongside traffic. Although the bicyclist should also watch, collisions may occur when the car doesn’t use their turn signal, makes a turn and slows down in the bicyclist’s path or turns without looking and hits a bicycle rider.

Left-hand turns also pose liabilities. In these instances, the car or truck is making a left-hand turn and the bicyclist is traveling in the opposite direction on the other side of the road. The motorist needs to be alert to bicycle riders, while the bicyclists should make sure they’re visible to all passing cars. As one issue leading to this type of collision, the bicycle rider uses the sidewalk before suddenly passing through a crosswalk while the car is turning left.

Although motor vehicle operators need to exercise additional caution, bicycle riders may be found negligent or partially responsible for any resulting injuries if they:

The exception is when children are riding and still learning the rules of the road. In these cases, contributory and comparative negligence do not play a factor when determining responsibility.

Furthermore, even bicycles traveling at slower speeds can become a safety hazard to pedestrians when the cyclist uses the sidewalk. If involved in a collision, the bicyclist may be found responsible if they:

For bicycle riders using the sidewalk, the NHTSA recommends:

Being hit by a car as a bicyclist or pedestrian can be a life-changing experience, involving extensive recovery and potentially reduced future employment opportunities. If an insurance carrier says you’re partially or completely responsible for the accident, Trantolo & Trantolo’s team is here to help with your pedestrian accident claim. To bring your case to our attention, contact us today.