Can Potholes Be Responsible for Car Accidents?

In spring and summertime, many drivers in New England continue to experience winter’s wrath on the roads, when deep ruts are left in the roadways – long after winter weather ends. Before construction crews fill and pave over the damage, drivers and motorcycle riders need to be aware and ready for these potential hazards.

Potholes are not always visible, sometimes obscured by dark conditions or filled with water, so even cautious drivers may not see them. Hitting a pothole risks damage to your car, including to the shocks and suspension system. The impact can be equivalent to a collision at 35 miles per hour.

In extreme cases, hitting a pothole may lead to an serious accident, which might even include a fatality – especially if the car hits a motorcycle, bicyclist or pedestrian.

How Do Potholes Form? 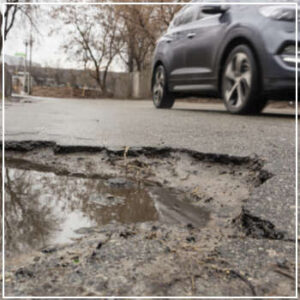 Potholes are an unfortunate road hazard that correlate with freezing and thawing. Starting with a crack in the asphalt, water seeps below the surface, where it freezes. Because ice expands, freezing forces some of the asphalt upward, creating a depression in the pavement.

Vehicles constantly driving over these spots can worsen the damage, resulting in a wider, deeper pothole when warm weather arrives. Although potholes can form on any roadway, areas with poor drainage and lots of traffic tend to be more prone.

If towns and cities take their time maintaining the roads, these depressions may remain for months – often until a major accident occurs.

How Potholes Damage Your Vehicle

According to an Urban Roads report from TRIP, highly populated areas tend to have poorer road conditions. In Connecticut, the top three urban areas – Stamford-Bridgeport, Hartford and New Haven – are graded above 30, a number which indicates the percentage of “poor” roads in the region.

Across the country, potholes and dangerous road conditions are responsible for one-third of annual traffic fatalities. Although drivers are expected to be on the lookout, potholes are often worse than they appear, leading to tire blowouts and loss of control. A hole may be so wide that, in an effort to swerve around it, the driver hits another vehicle or collides into property.

Hitting a pothole can cause varying degrees of vehicle damage, some of which emerges later – possibly leading to an unexpected accident. Common issues include:

Within this group of issues, the following components of a vehicle may be affected:

Extreme pothole accidents, particularly when those involving multiple vehicles, could be life-changing. Victims may experience broken bones, traumatic brain injury or spinal cord injury. If a motorcyclist is involved, he or she could be thrown off the bike and seriously hurt.

Who Is Responsible for a Pothole-Related Accident?

When a pothole plays a role in a serious accident, three parties may bear some of the responsibility.

Particularly on the subject of city or town responsibility, you may encounter the following issues:

If you’re thinking about filing a claim:

If you have been injured in an accident, caused by a pothole which was left untended and not repaired, do not assume you’re solely responsible. To bring a claim against a negligent city, government entity or manufacturer responsible, contact the experienced car accident lawyers at Trantolo & Trantolo today.