Comparative Negligence In a Slip and Fall Case

Contrary to popular belief, not all slip and fall accidents on a wet floor will result in a large payout. In reality, these claims tend to have more nuances. Among the variables at play is something called “comparative negligence” – the plaintiff’s responsibility to recognize and avoid a hazard.

Due to this factor, a property owner may argue you should have seen and appropriately responded to a hazard on their premises. While it’s the defendant’s responsibility to establish comparative negligence and prove they reacted to the incident in a timely manner, anyone filing a slip and fall claim should be prepared for this scenario.

The Basics of Slip and Fall Cases 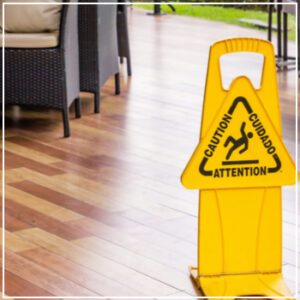 Property and land owners owe a duty of care to anyone on their premises. That responsibility varies, depending on the type of property and who was on the grounds.

In the latter case, a business owner owes a greater duty of care to customers than a homeowner who finds a trespasser injured on their lawn.

A slip, trip or fall does not always occur because of negligence, even if the building or grounds were in disarray or contained hazards.

Instead, the individual filing a claim needs to show that the property owner was aware of these dangerous conditions and failed to fix or respond to them in a reasonable amount of time.

To mitigate these risks, property owners should have a plan in place to identify, call attention to and repair such hazards. To prove a claim, the plaintiff will need to show:

To put it simply, comparative negligence references the victim’s own negligence or reckless behavior. In turn, because the victim bears a degree of responsibility for their injuries, any settlement will be reduced by how much their behavior played in the injury.

Comparative negligence becomes critical when the defendant calls attention to the plaintiff’s behavior. As a property owner is not automatically responsible for a victim’s injuries, the defendant may attempt to show the plaintiff was not acting with care while walking through their premises or intentionally engaged in risky behavior, purposely ignoring safety precautions.

For the plaintiff, you need to prove:

Yet the defendant’s word is not always taken as absolute. They may also need to show that:

If the defendant is found not to be negligent, the claim won’t go forward. However, if the defendant’s negligence is established, the plaintiff’s role and responsibility will further be examined to determine comparative negligence.

Comparative negligence is not uniform across all states. Instead, laws may use:

A handful of states have contributory negligence laws, which are significantly stricter. In these states, a plaintiff who is found partially responsible for their injuries, no matter how small the percentage, will not receive compensation.

Did you slip and fall on a commercial premises, due to a poorly labeled or unmarked hazard? Businesses have a duty to provide their customers a safe environment and those who do not should be held accountable. If you have a claim, contact Trantolo & Trantolo’s slip and fall lawyers today.

Please Share This
Read Previous Article:
« Fatal Car Accidents Have Increased During the Pandemic
Read Next Article:
5 Lessons From a Personal Injury Victim »