How Clothing and Shoes Affect a Slip and Fall Case

If you experienced a slip and fall on a public surface, chances are you were wearing shoes. Were they appropriate for the conditions you encountered or the job you were hired to perform? These details may seem insignificant at first but, if you decide to pursue a slip and fall claim, the defendant’s legal team could question your choice of footwear. 1) For instance, wearing shoes with worn-out treads or friction-reducing soles could deflect some of the blame for the accident on you.

If your choice of footwear is believed to have played a factor in your injury, you could receive a reduced settlement. To anticipate this possibility, it’s a good idea to preserve the evidence, in the event your footwear or certain items of clothing come into question. Here’s what you should know. 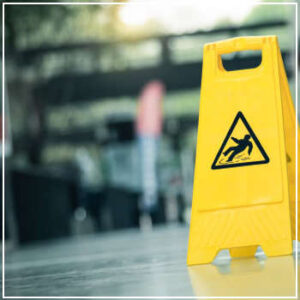 Bongiorno v. Americorp. is an often cited example of comparative negligence involving footwear. After falling down on an allegedly “unusually slippery” floor when entering a bathroom, plaintiff Bongiorno sued property owner Americorp. The defense claimed the plaintiff was wearing four- to five-inch heels, which partially contributed to her injuries.

Although the court rejected the defendant’s arguments and awarded Bongiorno the full amount, the case exemplifies how a defendant can attempt to assign fault to a plaintiff for his or her footwear choices.

What Footwear Should Do

A pair of shoes or boots should be in sound condition and allow the wearer to walk comfortably without losing one’s balance. As such, soles should offer a reasonable amount of traction, especially on slippery surfaces.

Although styles differ and certain shoes are inappropriate for certain environments, the pair you select should provide reliable stability when you walk across a maintained sidewalk or carpeted indoor surface.

Nevertheless, footwear design could play a factor in a slip and fall case in a number of ways:

In these instances, the defendant is attempting to play down their responsibility. Property owners should have a plan to identify slippery surfaces, including a visible warning and improvements to the situation. They should also:

Studies have shown that footwear and surface quality go hand-in-hand, in terms of safety:

When Clothing Plays a Factor

In some instances, the plaintiff’s footwear has sufficient traction, but his or her pants have covered the heel or get easily caught on other objects, thus increasing the chance of a slip and fall injury. Although clothing is less likely to play a role, it could under the following conditions:

What to Do After a Slip and Fall Injury

Be sure to preserve your shoes and pants after an injury; the defense could request them for evidence or testing. Place each in separate containers or sealed plastic bags, taking care to not wash or scrape anything off the material.

Because items can be stolen, damaged or lost, take pictures of your shoes and pants from multiple angles to preserve evidence and support your statement, should your footwear come into question. In this case, evidence helps:

To further show your shoes played a minimal or nonexistent role in your injuries, always take pictures of the area you fell, showing the conditions at the time of the incident.

If you were injured after falling on a slippery surface, turn to Trantolo & Trantolo to prove the property owner or building manager neglected the public a duty of care. To start your claim, contact one of our slip and fall lawyers today.

Please Share This
Read Previous Article:
« The Risks of Prenatal Opioid Use & Exposure
Read Next Article:
When “Sometimes” Is Not An Option »