What You Should Know About CT’s Pedestrian Safety Bill

In recent years, fatal pedestrian accidents have been on the rise in Connecticut. In response to the growing statistics, a Pedestrian Safety Bill was proposed in 2020 and passed in the State Senate after a round of revisions in May 2021. Governor Lamont officially signed off on House Bill 5429, set to take effect on October 1, 2021.

This piece of legislation enacts measures to ensure state roadways are safer for those traveling on foot or by bicycle. While towns would be able to set their own speed limits, the state will impose higher fines on motorists for speeding or driving distracted.

Here’s what Connecticut residents should know about House Bill 5429.

What Is the Pedestrian Safety Bill? 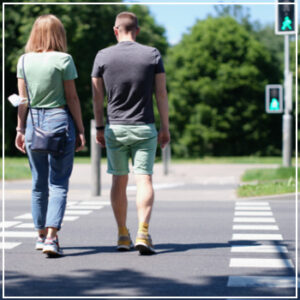 Passed with bipartisan approval in the Connecticut State Senate, the Pedestrian Safety Bill was proposed to address the increase in pedestrian fatalities over the past few years.

Drivers, bicyclists and pedestrians can expect the following changes:

How Did the Bill Come to Be?

The Pedestrian Safety Bill strives to decrease these numbers by targeting traffic and road designs that create unsafe conditions for pedestrians. Among them are high speeds in the cities and lenient law enforcement that leads some drivers to believe they will not face punishment for traveling over the speed limit.

The Connecticut Post highlighted additional aspects that create dangerous conditions for pedestrians, including:

The rising number of pedestrian fatalities in Connecticut reflects national trends. According to figures from the National Highway Traffic Safety Administration, 6,205 pedestrians died in 2019 – that’s one person every 85 minutes.

Pedestrians are 1.5 times more likely to die in an accident than those traveling by car. While anyone can be the victim of a pedestrian accident, certain individuals are more vulnerable than others, including:

The faster a car travels, the more likely a pedestrian accident will be fatal. These fatalities are more likely to occur in cities, while crossing outside of an intersection and at night.

Pedestrians can stay safe by using a crosswalk or intersection, staying visible and eliminating distractions that could impede your judgement as you cross the street.

Were you or a loved one struck by a reckless driver? Our pedestrian accident lawyers will fight for the compensation you deserve. To pursue a claim, contact Trantolo & Trantolo.