What You Need to Know About Electric Scooter Lawsuits

In recent years, major cities across the United States have seen an influx of electric scooters, also known as E-scooters. Building off the momentum of bike share and rental services, electric scooters have been presented as a new convenient way to travel, without having to rely on public transportation.

In Connecticut specifically, electric scooters first rolled out in New Milford at the end of 2019. Lynx City Electric Scooters, a micro-mobility transportation company based in Bethel, has since expanded into Bridegport, CT and Orlando, FL.

Yet from the get-go, these scooters caused problems and soon became a public safety hazard. For instance, rather than being returned to a designated location, some users would simply leave the scooter on the sidewalk, creating a trip hazard for pedestrians.

The issue of riding safety has also come into play. Companies like Lyft, Bird and Lime include disclosures stating the user needs to be wearing a helmet, but riders rarely have one on-hand. Many also fail to completely read the fine print before taking an electric scooter onto the sidewalk or road. Due to these factors, plaintiffs have started filing lawsuits against electric scooter companies.

If you were injured as a rider or pedestrian, here’s what you should know.

What are Electric Scooters? 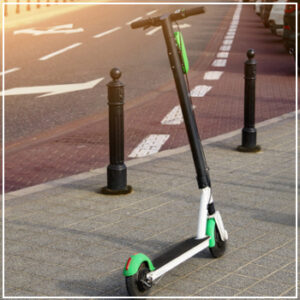 Although individuals can purchase electric scooters for personal enjoyment, the lawsuits have been going after rideshare companies that set up E-scooter kiosks for public use in major metropolitan areas. Eventually, they migrated to college campuses for their convenience.

Individuals who want to use an E-scooter first have to download an app, which shows where the nearest scooters are located. Once the rider arrives, he or she uses the app to scan and unlock the scooter. Then, banking information is entered into the app, so a payment can be made to activate the scooter.

Prior to full use, the rider has to agree to certain terms and conditions. The user must scan their driver’s license, then review a series of guidelines about rules and operations, including that a helmet must be worn while riding. Other rules include riding around pedestrians and obeying all rules of the road.

Once the rider agrees, they can use the device to reach their destination, where they leave the scooter for the next rider. Meanwhile, the app tracks the user with GPS technology to charge their account.

After the introduction of electric scooters, it became apparent that the companies who own these devices have minimal oversight, were lax about maintenance, and did not disclose certain facets of operation.

A limited study published in JAMA examined 249 individuals with E-scooter injuries in Los Angeles emergency rooms from September 2017 through August 2018. Most riders in this group were over 30 years old. Approximately 58 percent of men had slightly more injuries than women.

Researchers found more than 95 percent of injured individuals were not wearing a helmet, nor consistently following traffic laws. From the cases examined, 40 percent involved head injuries, over 30 percent of riders experienced broken bones and 11 percent collided with a person or object. As the most prevalent cause, 80 percent of riders fell off the scooter.

While this study offers a snapshot, these are the biggest hazards of operating or being in the vicinity of an E-scooter.

Riding On the Sidewalk

Due to the risk of pedestrian collisions, states and cities have actually banned electric scooters from sidewalks. Yet, most municipalities don’t specifically restrict this practice. The speed at which electric scooters can travel means both the pedestrian and rider may be facing significant injuries.

Even in low-congestion areas, an inexperienced rider could hit a stationary object, like a pole, trashcan or bench. Riders who haven’t quite figured out the device’s operation may collide with one of these objects after losing control, getting injured and causing property damage in the process.

Added to this, the dock-less format means the rider is not required to return the scooter to a designated location. Although leaving the scooter upright via the kickstand is encouraged, many simply discard the scooters flat on the pavement, creating a trip hazard for pedestrians and other riders.

In an accident between a car and motorcycle, the rider’s exposure and the bike’s two-wheel design are significant hazards. Although scooters have the same vulnerabilities, the risks become exponentially higher for three reasons: The user is rarely experienced at successfully handling the scooter, the vehicle has a smaller design and doesn’t receive regular maintenance.

Furthermore, scooter users are expected to follow the rules of the road but many riders who haven’t read the full agreement may fail to comply. Instead, scooter users will travel in bike lanes, alongside traffic or try to maneuver around other vehicles.

As E-scooters are not classified as motorcycles, there are few laws to govern its usage or obligate the rideshare companies to maintain their vehicles and enforce safety standards.

In October 2018, a class action lawsuit in California state court alleged that Bird, Lime and other scooter companies failed to anticipate how their devices could become a public safety hazard or take action after multiple pedestrians were injured. Filed by pedestrians, the lawsuit further alleges how mechanical defects, lack of instruction and no company oversight contributed to their injuries.

Additional litigation in California and other states points to a high number of shoulder, wrist, arm and foot injuries, ranging from sprains to broken bones. Some required stitches, while other riders needed surgery.

Traveling at nearly full speed, some riders have fallen after the scooter’s wheels or the throttle locked suddenly, lost control due to a loose handlebar, or were hit when a dim headlamp failed to provide sufficient visibility. Furthermore, Bird has come under fire for a parts shortage. The company had been using old or damaged components, including brakes and throttles, to repair scooters in operation.

In addition to these factors, several electric scooter companies use geo-fencing, which is not disclosed in the user agreement. Geo-fencing causes the scooter to automatically slow down, regardless of how fast the rider was going, once they enter an area presumed to have a higher amount of pedestrian foot traffic. The scooters give no warning, except for a text message, and the rider loses control or is hit from behind by another scooter, bicycle or car.

To date, electric scooter companies have attempted to place responsibility on the rider, claiming the user is at fault for not reading the complete agreement before signing.

Depending on the nature of the incident, an electric scooter injury may be a product liability claim, slip and fall or pedestrian accident. If you were injured as a rider or pedestrian, the E-scooter company’s negligence may be to blame. To pursue a claim, contact us today.

Please Share This
Read Previous Article:
« What Should You Know About CBD Lawsuits?
Read Next Article:
Why Some Drivers Still Refuse to Wear Seat Belts »