In newer-model cars, rearview or backup cameras are now included among the standard safety features. However, adoption for commercial vehicles, including trucks and buses, has been somewhat slower in the United States. In Europe, the Council of the European Union announced last year that advanced safety features will be required of all trucks, buses and cars for personal and commercial purposes by 2022. In particular, commercial trucks and buses will need to have smaller blind spots to detect pedestrians and cyclists close to the vehicle.

To date in the US, the National Highway Traffic Safety Administration (NHTSA) requires backup cameras on light-duty commercial vehicles under 10,000 pounds to increase the driver’s field of vision to better detect pedestrians – especially small children – walking or standing nearby.

Since their introduction over a decade ago, studies have shown that backup cameras help reduce accidents. Specifically where trucks are concerned, consider the following points.

FMCSA Is Approving Them for More Vehicles 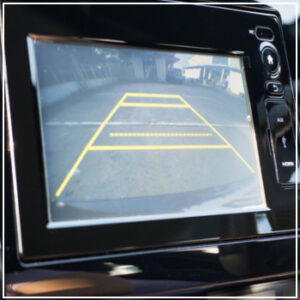 According to a March 2020 report, the Federal Motor Carrier Safety Administration (FMCSA) has allowed Vision Systems North America Inc. to implement Smart-Vision cameras within its vehicles to replace two rearview mirrors, claiming these devices exceed federal safety levels. In order to be effective, the cameras must be located on each side and need to offer a view of the highway to the vehicle’s rear and sides.

Going beyond what you’ll find in a personal car or truck, Smart-Vision systems involve multiple digital cameras attached toward the top of the vehicle’s exterior. They’re protected against the environment, yet not so obtrusive they throw off the commercial vehicle’s aerodynamics.

Once turned on, the cameras deliver a high-definition image on a monitor located between the windshield and door. Compared to traditional mirrors, the cameras increase the driver’s field of vision by 25 percent, nearly getting rid of blind spots and allowing for better visibility of surrounding areas.

As the vehicle is in motion, the driver gets a more comprehensive view of the highway on all sides, allowing for better lane changes and spotting loose cargo. Currently, the system is considered an alternative to rearview mirrors in Europe, where it has been in use for two years.

Because Smart-Vision employs multiple cameras, the system automatically has a backup, in the event one camera fails to work effectively. The positioning is also said to reduce fatigue behind the wheel, helps lessen the amount of fuel used and is less vulnerable to collisions.

Using Smart-Vision builds upon a similar motion FMCSA approved for Stoneridge in 2018. At that time, the FMCSA gave Stoneridge a five-year window to replace standard rearview mirrors with the MirrorEye multi-camera system. Similar to Smart-Vision, MirrorEye widens the driver’s view with three distinct angles to reduce blind spots as much as possible. In the process, collision risks are lessened and the truck’s fuel economy improved. This particular system offers night vision, glare reduction, low-light sensitivity and automatically monitors the back of the trailer to reduce right-hand collisions.

Other tests have shown these systems give drivers better visibility in the rain and low-light conditions. Compared to conventional mirrors, these are also less likely to fog up.

An Effort to Reduce Drowsy Driving

As Fleet Owner points out, rearview cameras are another effort to combat drowsy driving. Based on figures from Seeing Machines, artificial intelligence (AI)-based driver monitoring systems feature an infrared camera pointing at the driver’s eyes, while video data looks for algorithmic signs of drowsiness and distractedness. When this article was released, that particular system had already flagged truck drivers for 150,000 instances of fatigue and another six million for distracted driving.

In January 2020, the Harvard Crimson reported that Cambridge’s Department of Public Works would update its fleet of garbage trucks with backup cameras over the next couple of months. The motion was in response to a pedestrian death in 2018, which occurred when a truck backed up and killed a city resident. In addition to avoiding these types of accidents in the future, the cameras would allow accident footage to be pulled for use in a court case.

Yet, a study from AAA was quick to point out backup cameras are not designed to be used alone for safety but
as a supplemental system. Even though the cameras greatly improve rear visibility, drivers of cars and trucks are still expected to check around all sides for obstacles. While they do improve the view, particularly 10 feet directly behind the truck, they’re considered an extension of traditional mirrors.

Were you involved in a truck accident? Footage from rearview cameras may be part of the evidence gathered to support your claim. If you’re dealing with a difficult insurance company after a life-changing accident, call Trantolo & Trantolo today.