You’re driving along when suddenly, a motorist merges into your lane and sideswipes your car. The impact is often brief but the damage can be significant. Although you didn’t see the other car coming, you may wonder what you could have done differently.

Lane changes play a big role in car accident statistics: According to the National Highway Traffic Safety Administration (NHTSA), these incidents account for nine percent of all crashes.

A driver, perhaps speeding or distracted, travels over the line and collides with another car. In many of these cases, responsibility is clear. The motorist changing lanes had a duty to drive without distractions, obey the speed limit, use their turn signal and wait until there was enough space to enter your lane. Yet, he or she did not acknowledge the other vehicle and moved right into the driver’s blind spot.

In other cases, especially when lanes merge, responsibility and fault may be less defined and more factors come into play. Have you found yourself in such an incident? Here’s what you should know. 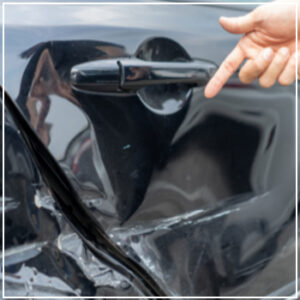 In a typical lane-change accident, a driver moves from one lane to another without acknowledging the surrounding cars. Due to the following factors, these individuals are nearly always at fault:

Based on the rules of the road, responsibility falls on the driver changing lanes to look out for vehicles and take care before making a maneuver. In this scenario, the driver is expected to wait until enough room exists to merge. They should signal to other motorists they plan to make this move, rather than catch other drivers off guard.

These factors can shape the direction of your claim if a motorist attempting to change lanes hit your vehicle. You may be asked:

Along with these aspects, merging lanes brings in other outside factors. Cars may merge due to changing traffic patterns – i.e. an accident – or to enter a highway. When speeding is involved, a driver might not have enough time to brake as another car enters, resulting in a rear-end collision. Lane-change accidents from merging often end up as sideswipe incidents, in which both drivers bear some of the responsibility.

How can two drivers be at fault?

As a result of these scenarios, a driver ends up merging onto the road but hits another motorist from the side, who didn’t slow down. However, the driver who crosses over the line in a sideswipe incident tends to shoulder a larger portion of responsibility.

Understand that not all lane-change accidents are created equal. Highway driving involves high speeds – and subsequently greater damage. On local roadways, additional property damage may result, in addition to injury for both parties.

Was your vehicle hit as another driver attempted to change lanes? If you’re recovering from a life-changing accident, with bills piling up due to time off work, Trantolo & Trantolo’s car accident lawyers are here to help. To learn more, give us a call today.