Through May 2021, nearly 3,900 nursing home residents in Connecticut have died as a result of COVID-19 and over 14,000 others were infected.

In response to these figures, Yale University recently released a report titled “We Were Abandoned: How Connecticut Failed Nursing Home Workers and Residents During The COVID-19 Pandemic”. Researchers from the law school’s Worker and Immigrant Rights Advocacy Clinic found that across the state, persistent staffing and PPE shortages likely played a role in the number of COVID-related deaths during the past year. 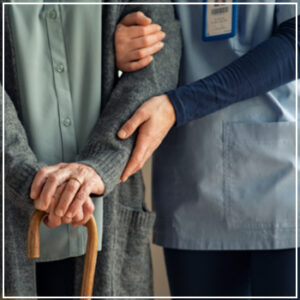 Conducted pro bono by faculty and students, the report was issued on behalf of SEIU District 1199 New England, a union of healthcare workers that intended to strike against poor conditions in state nursing homes. The 52-page report goes into detail about understaffing, low wages, limited protective equipment and inconsistent COVID-19 testing.

Conclusions were based on interviews with nursing home workers and a review of state Department of Health records. What are the report’s major findings?

Researchers found that Connecticut nursing homes routinely failed to meet the standards established by the Centers for Disease Control and Prevention (CDC) concerning personal protective equipment (PPE). This included its availability, storage and usage in facilities.

Hands-Off Approach from the DPH

Staff members consistently mentioned a hands-off approach from the State Department of Health. Specifically, the DPH often ignored homes that were not following CDC protocols for infection control, testing, PPE and quarantining residents, nor did the organization address low staffing levels at many facilities.

Examining DPH records, researchers found that Connecticut nursing homes received 34 COVID-related citations from March 2020 to February 2021 and just under $100,000 in fines. Yet, none of the state facilities with the highest levels of COVID-related fatalities were fined.

Going forward, underfunding from the state and Medicaid appears to be an issue for Connecticut nursing homes. Among the factors that could further decrease staffing levels and the quality of care residents receive is the state’s budget.

Figures show that between now and 2023, facility funds will not coincide with the cost of inflation. In turn, nursing homes across the state would be operating with a deficit of $70 million. This comes in spite of Governor Lamont allocating $32.5 million from COVID-19 resources directly to nursing homes to address staff and infection-control protocols.

In conclusion, researchers advocate for increased funding to retain staff, pay higher wages and improve patient care. The report also calls for the state’s minimum staffing levels to be raised and greater oversight from the State DPH.