Over the past couple years, federal government organizations covering nursing home care have pledged to closely monitor and reduce antipsychotic usage. According to a 2018 Human Rights Watch report, related figures started to drop between 2011 and 2016, but off-label usage continues to persist.

Data from the 157-page report found that homes across multiple states and regions continue to use antipsychotics to control patients with dementia – a practice known as “chemical restraint.” To date, the FDA has only approved antipsychotics to treat conditions like schizophrenia and, because of their serious side effects, they come with a black-box warning. For the elderly, this drug class is especially hazardous. Patients have double the risk of death and the medications have been known to cause severe muscle stiffness, jerking movements, low blood pressure, high blood sugar and blood clots.

To put together this report, the Human Rights Watch visited more than 100 nursing facilities across six states and conducted over 300 interviews with the residents, staff, family members, government officials, elder care advocates and long-term care and disability experts. What did their study uncover? 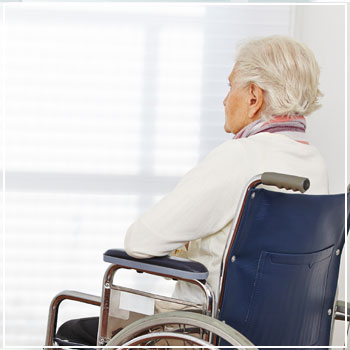 The percentage of patients who are given antipsychotics varies from state to state, although “chemical restraint” remained a practice to some degree in all locations. Of the six states surveyed, Kansas had the highest concentration, with roughly 20 percent of all patients receiving an antipsychotic drug to control behavioral issues.

Yet, figures could also be skewed. Reported in the Kansas City Star, 24 homes asked the researchers to leave upon arrival, prevented them from interviewing residents about their treatment, or stated their residents weren’t competent enough to consent to an interview.

No Diagnosis or Consent

The report concludes that over 179,000 people are prescribed antipsychotic drugs without an approved diagnosis or without consent – either from themselves or their families. These factors become amplified once a nursing home resident has dementia or Alzheimer’s disease.

In homes, 16 percent of all residents receive an antipsychotic without diagnosis of an approved condition. Not only does this practice go against federal guidelines concerning chemical restraint, but it further violates various state laws for nursing facilities. Particularly, individual states have rules of consent – a resident or caretaker must give informed consent before starting a medication or treatment – or offer the right to refuse treatment. Almost deliberately and admittedly going against these rules:

Family members may discover their loved one is on an antipsychotic during visits when a patient sleeps all the time, seems like a zombie, won’t speak or seems incoherent or forgets how to read.

Why the Practice Persists

Chemical restraint is considered a degrading, debasing practice and has turned into a human rights issue. Yet, some nursing facilities continue to employ it for a few reasons:

Between 2014 and 2017, the CMS’ government inspectors issued 7,039 citations for antipsychotic use. Of this total, 97 percent of the reports claim the drugs caused no discernible harm. Also, almost none of the citations came with the mandatory fine, in spite of the fact that the federal government started pushing for reduced usage in 2012.

While the CMS pledged to reduce antipsychotic prescriptions by an additional 15 percent by 2019 and individual states like Connecticut enacted their own measures to curb usage, the regulations strictly enforced during the Obama era ended in November 2017. From this point onward, the CMS announced a moratorium on this and other regulations introduced during this period. Thus, homes will likely have more leeway – and less oversight – when it comes to prescribing antipsychotics off-label.

Were you or a loved one harmed by an antipsychotic prescribed in a nursing home? Whether you did not give consent or experienced life-threatening side effects, you have the option of legal recourse. To learn more about your options, contact our team of nursing home negligence attorneys at Trantolo & Trantolo today.