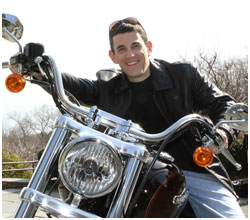 Over the past 77 years we have helped 1000’s of motorcyclists who have been hurt in motorcycle accidents. We also know, because we actually ride, what to watch for, to be as safe as possible. Here are some scenarios.

While riding itself is fairly dangerous, due to the lack of protection and the bike’s design, motorists need to learn to share the road. Many motorcycle collisions, often involving another vehicle, stem from this aspect:

In this situation, a car or truck makes a left turn in front of a motorcycle who is attempting to drive in a straight line. This accident can be pinpointed to a few issues:

Just how frequent is this scenario? About 42 percent of all motorcycle accidents involve left turns.

All drivers should be prepared for what’s in front and understand how to respond. For motorcyclists, being unaware about conditions, especially if gravel or sand is ahead, results in a wipeout on the road.

Or, in a similar scenario, the motorcyclist is going too fast, rounds a corner, and isn’t prepared for what’s on the other side. He or she may not make the turn or, worse, hits a pole or another vehicle.

A Car Rear-Ends a Motorcyclist

For a car-on-car collision, this accident turns into a fender-bender. With a motorcycle, rear-ending may become fatal. Typically, the motorcyclist stops, while the car doesn’t break soon enough. The motorcycle, however, ends up flipping, taking the rider with it.

To be safer, it’s recommended that a motorcyclist stay to the side, rather than sit directly in front of a car, when coming to a stop. As well, if you’re riding, know what’s behind you and flash your lights to show you’ve come to a complete stop.

A Car Opens a Door

In maintaining a duty to each other, motorists of all kinds should follow the rules of the road when driving, and be watchful of others when parked. This accident often occurs when neither happens.

For instance, a driver parks and, without looking at traffic, opens his door. A biker, on the other hand, is riding toward the lane’s edge – or even outside it – and ends up colliding with the car’s door.

It’s not recommended to ride in the rain or snow, but if you do, be ready with quality tires and appropriate gear. As you’re on the road, be on the lookout for slippery surfaces – manhole covers and oily patches in particular. Otherwise, not being prepared and ignoring your surroundings may lead to a serious accident.

56 percent of all motorcycle accidents involve a head-on collision with another motorist. Like rear-end collisions, when a car strikes from the front, the results are frequently fatal.

When traffic slows down, bikers may think they can cut corners by riding between the lanes. This action, however, is a recipe for disaster:

If you’ve been involved in one of these accidents, Trantolo & Trantolo’s experienced staff takes on motorcycle cases. Contact one of our Connecticut locations to have us review your claim.

RideApart.com, “10 Common Motorcycle Accidents And How To Avoid Them”

Please Share This
Read Previous Article:
« How Do You Know You Have a Medical Malpractice Claim?
Read Next Article:
15 Situations Leading to Slips and Falls on Business Premises »