If you’ve been scheduled for a major surgical procedure within the past few years, a doctor has likely brought up the option of robotically assisted surgery. When you’ve seen advertisements for world-class hospitals, these capabilities may appear to place the facility and its doctors above the competition.

Since the 2000s, robotically assisted surgeries have become more common. Specifically, having a surgeon control the da Vinci robot allows for smaller incisions and these procedures generally result in less downtime, scarring, pain and blood loss for the patient. Unlike traditional procedures, the surgeon controls the robot’s arms while viewing the surgical site through a three-dimensional, high-definition camera.

However, after reviewing multiple medical studies, the FDA released a warning at the end of February against robotically assisted mastectomies and other cancer surgeries, citing decreased long-term survival and poor outcomes for patients. Their safety communication specifically states the FDA has not approved the da Vinci and other surgical robots for cancer-related surgeries and has not produced the data supporting their usage for these procedures.

The FDA further notes that surgeons have been using these devices for non-authorized procedures. As such, the warning is geared toward patients wanting to make better-informed decisions about their health care and to dissuade doctors from off-label robotic surgery.

Behind the FDA’s Decision 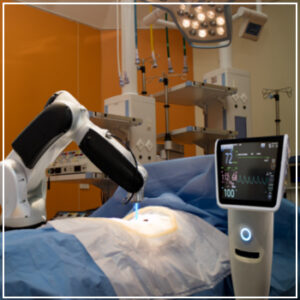 Among the studies cited, one from the New England Journal of Medicine concluded that, for hysterectomies in women with cervical cancer, robotic devices were associated with lower rates of disease survival compared to traditional surgery. The study involved 600 patients with early stage cervical cancer, who received minimally invasive surgery (laparoscope or robot) or open surgery.

Based on these findings, the FDA’s warning recommends that patients discuss the benefits, risks and complications of robotically assisted surgery before making a decision. Patients are also advised to ask doctors about their training, experience and outcomes for these procedures.

Intuitive Surgical, the company behind the da Vinci robot, responded to the FDA’s warning, stating the FDA has approved robotically assisted systems for hysterectomy and prostatectomy procedures through its 510k process. Furthermore, they claim 15,000 peer-reviewed articles support the method’s effectiveness.

While the da Vinci robots offer a steady arm for greater precision and let patients recover in less time, these devices have experienced a high number of recalls over the past decade. An NBC News report uncovered 175 recalls filed with the FDA, although the number has gone down in recent years. Reports range from software updates to issues with the knife and surgical arms.

Among these recalls is a 2013 warning letter the FDA issued concerning electrical arcing – when electricity travels from the robot’s arm to the patient’s flesh – and marketing the device for thyroid surgeries.

From the FDA’s MAUDE (Manufacturer and User Facility Device Experience) database, robotically assisted surgery has a high number of complications, including 144 deaths, 1,391 injuries and 8,061 device malfunctions over a 14-year period. Among these complaints are parts of the robot falling into patients, electrical issues, having to restart the surgery or errors requiring the surgeon to switch to open surgery midway through the procedure.

As NBC discovered, complications may be life-changing. In one instance, a patient experienced hydronephrosis after an injury to a ureter resulted in excess fluid buildup in the kidneys. Her colon was damaged to the point she needed a permanent colostomy. Other patients interviewed experienced similar thermal burns.

NBC also uncovered that reports from Intuitive consisted of multiple complaints batched together: In one case, 200 injuries were grouped into a single report. As such, it’s estimated the complaints and injury rates are much higher than reported.

Added to these factors, while the robots come with a million-dollar cost, doctors themselves don’t receive extensive training. NBC found that one professional received only two hours’ worth of instruction before using the da Vinci robot on the job.

The FDA’s warning comes at a time when hospitals have started advertising robotic-assisted mastectomies, claiming that patients receive less scarring compared to open surgery. For comparison, robotic surgery is done near the chest wall by the armpit and has a shorter hospital stay. Standard surgeries are known to leave longer, more disfiguring scars.

As of yet, the FDA’s data hasn’t found one method superior over the other. Although France and Italy have conducted similar clinical trials between patients, no such study has yet to be completed in the United States. With robotic surgeries in general, the FDA has examined the complication rate after 30 days and to date, both methods are comparable. For cancer-related surgeries, approval would involve analyzing long-term, disease-free survival and local cancer recurrence.

Did you undergo surgery with a da Vinci robot or another laparoscopic surgery, only to experience severe, life-altering complications? Patients have the right to make informed decisions about their health before consenting to such a procedure. Without going over all risks and potential outcomes, your doctor may have committed medical malpractice. If you believe you have such a claim, reach out to a Trantolo & Trantolo attorney today.