Which Dog Breeds Bite The Most? 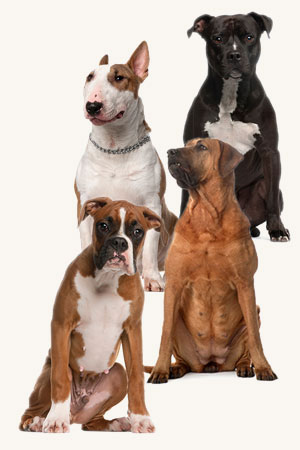 Every day, 1,000 U.S. citizens get hospitalized for dog bite-related injuries. Yet, while all dogs bite to some degree, certain ones do it more than others, and out of this group, a few tend to cause more injuries.

Breed Most Likely to Attack

According to data analyzed by DogsBite.org, molosser breeds – a category of large, strongly-built breeds all sharing a common ancestor – were responsible for the majority of bites from 1982 to 2014. These dogs tend to have heavy bones, pendant-shaped ears, and a short muzzle.

Dogs falling into this category include:

From this breed, 86 percent of attacks result in bodily harm. 81 percent happen to children, while 89 percent involve adults. They further account for 76 percent of all dog-related fatalities, and 86 percent of maiming incidents.

Out of this group, pit bulls in particular account for the majority of off-property attacks resulting in death.

Certain dogs, regardless of breed, are more likely to attack than others. According to a Denver County survey:

Out of all dogs, the following tend to bite the most, regardless of whether fatalities result:

Pit Bulls: Compounding to the statistics above, these dogs are more likely than any other to attack their owners. Minor incidents, such as the dog getting startled, may trigger such an incident. Pit bulls account for the greatest number of human fatalities compared to other breeds, and because of this risk, some insurance companies will deny a homeowners policy if this dog is present.

German Shepherds: Intelligence has led these dogs to be essential in military and tactical missions, yet cases of German Shepherds turning on their owners have been reported.

Rottweilers: This breed has long been a police or guard dog and has garnered a fairly accurate reputation as a species that’s extremely aggressive and strong. This latter characteristic has resulted in a number of biting incidents over the years, especially when the dog isn’t properly trained and socialized.

Doberman Pinscher: Like the Rottweiler, this breed is also known for its strength and aggression. However, studies show this breed is more likely to bite another dog than a human.

Wolf-Dogs: Around since the 19th century, these dogs continue to display their ancestors’ wild traits. As such, they’re known for being aggressive and difficult to tame.

Nevertheless, even if a dog has a greater propensity for biting, behavior comes down to the owner. Particularly, no matter what breed, the owner is responsible for training and socialization, as well as control.

If you’re involved in a dog attack, there’s a fair chance you’ll be facing high medical bills and an owner that avoids responsibility for its pet’s behavior. In these instances, legal representation is essential, so turn to Trantolo & Trantolo. Contact any of our Connecticut locations for more information.

“25 dangerous dog breeds most likely to turn on their owners,” DogNotebook.com