Why Children Are Vulnerable to Dog Bites

For adult pet owners, you likely know how to react when an unfamiliar dog barks or lunges at you. Through your experience with dogs throughout life, you may be able to tell when a dog is feeling territorial or ready to attack.

Yet for children, studies show that both size and a lack of understanding about body language puts them at greater risk for injury. Not limited to bites, these injuries could be the result of traumatic, potentially disfiguring attacks that may change the course of their life forever. 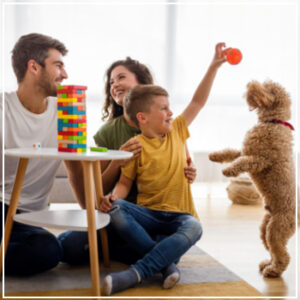 Nearly 40 percent of American households own at least one dog, which equates to about 70 million dogs in the United States. An estimated 5 million people experience a dog bite each year, half of which are children.

According to the Centers for Disease Control and Prevention (CDC), 800,000 of all dog bites demand medical attention and 334,000 are so severe, they require treatment in a hospital.

On an annual basis, dog bites are more common for children than measles, mumps and whooping cough. They also occur more frequently than injuries involving a skateboard, moped, ATV, bicycle or playground equipment.

Infants and toddlers bear the greatest amount of risk. Whether your children are walking around the neighborhood, you’re bringing a new baby home or thinking about getting a dog, here’s what you should know to keep the household safe.

Who Has the Greatest Risk?

Why and How Do These Incidents Happen?

Due to their small size, children can be more easily knocked over by a dog, compared to adults. Attacks tend to occur as a result of one or more of the following:

To help reduce the risk of these dangerous incidents occurring, it’s recommended that:

As a child gets older, it’s important to talk about dog body language and how to understand cues for aggression. A study published in the Journal of Nursing, Social Studies and Public Health found that the majority of children ages 8 to 12 cannot accurately recognize a dog’s emotions. As one concern, fewer than 10 percent of all 372 participants were able to determine when a dog was angry or about to attack.

Although all dogs can bite, an animal’s size influences the risk it poses to a child and the damage it can cause. A study from Ohio State University found that animals weighing 66 to 100 pounds or with a wider, short head pose the most significant risk.

Keeping these points in mind, those considering a dog for the family should:

Connecticut has strict liability laws for dog attacks, including for bite and non-bite incidents, that hold the animal’s owner, handler or keeper responsible. Children under age 7 are not held responsible for provoking a dog, even if they wander onto the owner’s property.

If your child was bit or attacked by a dog and is now living with physical injuries or life-changing trauma, Trantolo & Trantolo is here to help. To pursue your claim with our dog bite attorneys, contact us today.

Please Share This
Read Previous Article:
« Dangers of Driving with Snow on Your Roof
Read Next Article:
Car Accidents In a Snowstorm: Establishing Responsibility »