You know the risks of driving under the influence and that texting behind the wheel is particularly deadly. However, many drivers will think nothing of heading off on their morning commute after sleeping only five hours. Multiple studies indicate that getting less than six hours of sleep is just as bad as driving intoxicated.

Each year when we turn the clocks ahead for daylight saving time and get fewer hours of sleep, AAA releases a statement reminding drivers to go to bed earlier, so they get at least seven hours before driving the next day. Behind this push, the organization’s Foundation for Traffic Safety has found that missing one or two hours of sleep during a 24-hour period significantly increases your crash risk. Once you’ve slept fewer than five hours, your crash risk is actually on par with someone who’s drunk, making you a hazard on the road.

A survey by AAA found that roughly 30 percent of drivers don’t listen to this recommendation – or even pay attention to their bodies. When they have trouble keeping their eyes open, they’ll continue to drive. If feeling tired isn’t enough to stay home or pull over and take a nap, think about the following points. 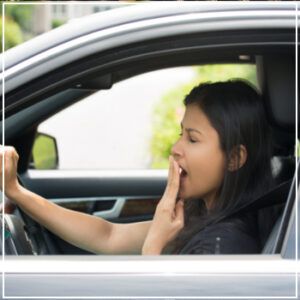 You might think you’re cognizant but nodding off behind the wheel doesn’t look all that different from drunk driving. A tired driver may:

What’s the solution? Simply put, you have to catch up on sleep. To be more alert and safe, get in at least seven hours a night and take naps to prepare for a longer drive.

What won’t help? AAA reminds us that drinking coffee or energy drinks, rolling the windows down and singing along to the radio don’t always keep you awake. Eventually, your brain will fall asleep.

How Serious is Driving Without Sleep?

According to NHTSA’s National Motor Vehicle Crash Causation Survey, roughly 20 percent of all fatal motor vehicle accidents in the U.S. go back to drowsy driving. Based on data from police-reported multi-vehicle crashes in 2013, driving drowsy caused 72,000 crashes, 44,000 injuries and 800 deaths. However, it’s estimated that fatalities may be severely underreported. It’s believed that drowsy driving may contribute to 6,000 fatal crashes annually.

Supporting these findings, a 2018 SLEEP study found that once drivers have fewer than four hours per night, their odds of getting into a crash go up 15.1 times, in comparison to those who slept for seven to nine hours over the past 24 hours. In between these disparities, drivers who slept for five or six hours a night weren’t much better off; their chances of being responsible for a crash were 1.3 to 1.9 times greater than those who slept at least seven hours.

Lack of sleep only played one role in these statistics. Drivers who recently changed their work or sleep schedules within the past week and those on the road for at least three hours without a break also have elevated risks.

With these points in mind, the Centers for Disease Control and Prevention have identified who is more likely to drive drowsy:

Teens also have higher risks, based on a 2013 study examining 19,000 17- to 24-year-olds in New South Wales, Australia over a two-year period. Those who reported sleeping six or fewer hours per night were 20 percent more likely to get involved in an accident, compared to those who slept more than six hours. Specifically, 9.4 percent of drivers in the under-six group got into an accident, versus 6.9 percent in the above-six group.

Sleep Isn’t the Only Factor

Based on a report from the CDC, driving drowsy, regardless of the reason, greatly affects the body and influences how safe you are out on the road:

For their report, the CDC defines drowsy driving as a combination of sleepiness and fatigue, which may stem from untreated sleep disorders, medications, alcohol use or long or inconsistent work schedules, along with not getting enough hours. Among adult drivers, one in 25 report falling asleep at the wheel over a 30-day period.

On the subject of sleep apnea, a 2018 study by Boston’s Brigham and Women’s Hospital found that not every driver who’s sleep deprived realizes it. Sleep apnea negatively impacts one’s quality of sleep. Examining 3,201 adults, researchers found that those living with severe sleep apnea had a 123-percent higher crash risk than those without the condition, and seven percent of all participants had at least one crash during the past year. Exacerbating the issue, those who are chronically sleep deprived don’t perceive themselves as sleepy or impaired.

Were you involved in a car accident where drowsy driving played a role? Don’t put up with an insurance carrier denying your claim or placing the blame on you. If you’ve been injured and your life irreversibly changed, turn to Trantolo & Trantolo’s team of motor vehicle accident attorneys. To get started, give us a call today.