Where Are Car Accidents More Likely to Occur?

As you drive along, whether to and from work, on a trip or a weekend joy ride, you might not be thinking about where car accidents have the greatest chance of occurring. Yet, out of all places you could go, the following areas tend to see the highest incidence of collisions. 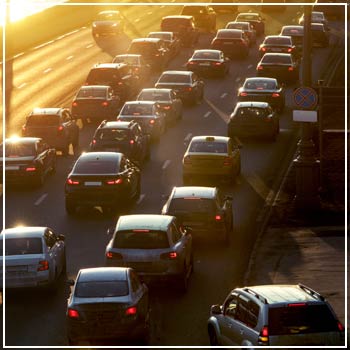 Believe it or not, most car accidents occur within 25 miles of your home, as drivers tend to be on auto pilot and use muscle memory when they go through familiar territory.

Inattentive driving in these spots has the potential to result in a person crashing into parked cars, causing an accident when backing out of a driveway and side-swiping other vehicles. Nationally, the Northeast sees the highest accident rate close to home.

During Your Evening Commute

Whether you take local roads or the highway, late afternoons and evenings see a deluge of drivers leaving work to go home. At the end of the workday, drivers aren’t always the most alert, which increases the likelihood of a collision. In fact, 16 percent of fatal accidents occur from 3 p.m. to 6 p.m.

According to statistics from the National Highway Traffic Safety Administration, rural roads are responsible for 3,000 more fatal car accidents per year than urban streets. Several factors influence this figure, such as a lack of lighting, poor maintenance and dated infrastructure.

You think you’ve just gotten to the end of your journey safely when you pull into a parking lot, but here, accidents often occur: Two cars pulling out bump into each other, a driver pulls into a space and hits one of the neighboring vehicles, a driver unsafely backing from a parking space or other cars not obeying the posted speed limit.

Accidents increase where two streams of cars head directly at each other. Especially when only a stop or yield sign is controlling the traffic, more motorists end up involved in side-impact collisions.

However, stop lights don’t solve all problems, despite the fact that some have cameras. Rear-end collisions usually happen here, as a motorist may neglect to stop for the vehicle in front or worse, assume that driver plans to go through the intersection at the tail end of the yellow light.

Busy, two-lane roads often leave little space for passing – or for error. As a result, drivers that drift over the center line or who attempt to abruptly drive around another motorist could be in a head-on collision.

After an accident occurs, you might have more to face than vehicle repairs. If you experience an injury, you’ll be spending time away from work, have to pay for medical treatments and therapy and could be dealing with an insurance company that doesn’t want to provide you fair compensation. If you find yourself in this scenario, turn to the car accident lawyers at Trantolo & Trantolo to present your claim.