Since early September 2019, the FDA and CDC have been looking into a vaping-related illness that has appeared in 46 states and is responsible for at least 12 deaths. Although both organizations continue to search for a source, no single factor across e-cigarette usage appears to be directly responsible for pneumonia-like symptoms of severe lung damage.

Since the FDA started closely monitoring these products in 2016, e-cigarette manufacturers like JUUL have come under fire for their practices. These include marketing to a younger demographic through social media, selling flavored vape juice and claiming their product is simply “water vapor”. Multiple reports also indicate these heat-based devices have potential to explode. Here’s what you should know about this concerning chain of events. 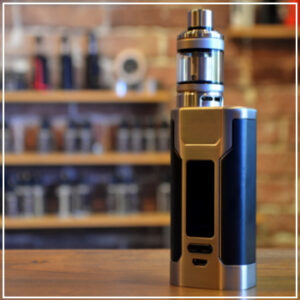 E-cigarettes became commercially available in 2007, advertised as a tobacco and tar-free alternative to traditional cigarettes. The product started picking up steam in the 2010s but was not classified as a tobacco product until 2016. This allowed manufacturers years to market these devices to a younger demographic as convenient and discreet to use.

Until recently, states monitored and responded to reports concerning vaping-related illnesses. With high numbers emerging at the state level, the CDC and FDA started investigating the potential cause in late summer. As of September 26th, the number of reported cases has risen from 380 to 805.

Research from both organizations has yet to find a common factor through brands, flavors, ingredients and substances. Although a higher number of admitted patients use a THC-based product, individuals who solely vape nicotine-based pods have also come down with the illness. Most patients vaped within the past 90 days, with a large percentage at least once in the last week.

In response, the CDC activated its Emergency Operations Center to address further cases. The FDA has been working with state public health officials to examine roughly 150 products containing a mix of nicotine, THC, cannabinoids, additives, pesticides, opioids and other toxins. At the same time, the FDA started its own separate criminal investigation to determine the role of black-market vape products in this outbreak.

Researchers believe Vitamin E acetate-based products could play a role. While the compound isn’t involved in every case, it’s present in a large percentage. To be inhaled, Vitamin E must be heated at high temperatures. Once it’s in the lungs, it returns to a liquid state that may create an inflammatory reaction, leading to respiratory distress, lung damage and breathing difficulties.

Before the public knew about this vaping-related illness, the FDA launched an investigation of reports correlating usage with seizures. From April to August, the agency had looked over 127 reports concerning seizures and similar neurological symptoms. Meanwhile, the CDC had been following up on 153 cases concerning respiratory symptoms.

In response to this recent group, the FDA released a statement telling e-cigarette users to avoid THC-based substances, legal or black market, as all may contain traces of Vitamin E acetate. The CDC followed this with their own warning, advising all consumers to stay away from vaping and monitor their symptoms.

Neither organization has stated whether flavored vape products are a factor in this recent outbreak. After years of marketing to teens, plus poison control reports of young children ingesting these pods, cities and a few states have started banning all flavored e-cigarette products.

The unnamed condition bears some resemblance to the flu, lipoid or acute eosinophilic pneumonia or acute respiratory distress syndrome. It’s characterized by a combination of the following symptoms, which may show within a few days’ time or gradually appear over several weeks:

Perhaps the most concerning aspect, lungs often look ravaged by disease and have been said to resemble a spider’s web. Scans reveal wide-spread inflammation, damaged alveoli and particles of fat lodged in tissue. In one reported case, a patient had to be placed in a medically induced coma after symptoms similar to the stomach flu rapidly deteriorated into multifocal pneumonia, severe sepsis and acute respiratory failure with hypoxemia (ARDS). A CT scan indicated the patient had fluid in her lungs and life-threatening blood clots had started to form.

A Lack of Regulation

Until 2016, Big Tobacco’s lobbying efforts got the upper hand over the FDA’s jurisdiction on tobacco products. The Family Smoking Prevention and Tobacco Control Act reversed much of these efforts, but only applied to new products introduced after 2007. In 2016, the FDA was able to extend their authority to all tobacco products. They have shut down manufacturers’ social media profiles, tightened sales of flavored cartridges and launched investigations into questionable marketing practices.

By 2021, all manufacturers must prove their products meet current regulations. However, the FDA’s efforts have been criticized as too little, too late. Based on data from the New England Journal of Medicine, 25 percent of all high school seniors vaped within the previous 30 days, up from 20 percent a year before, and nearly 10 percent of eighth graders have tried vaping. E-cigarette usage could be the gateway to future tobacco usage in young adults.

Research into microparticles indicates while e-cigarettes don’t contain tobacco and tar, they do harbor many of the same substances present in air pollution. These include:

Other studies indicate these devices negatively affect the cardiovascular system. A study released in the Journal of the American College of Cardiology found that vape juice itself – free of flavors, THC and nicotine – can induce endothelial dysfunction, a factor leading to the development of cardiovascular diseases.

A study published in Radiology supported these findings. Subjects in their 20s and 30s were monitored after taking 16 puffs of a nicotine-free and flavorless e-cigarette. The participants experienced significantly decreased blood and oxygen flow, which didn’t let up for about an hour after exposure. Researchers concluded that repeat exposure could put the user at risk for adverse cardiovascular events, including heart attacks.

Many who started using electronic cigarettes believed they were on the path to quitting entirely, only to have their health and safety jeopardized in other ways. If you’re a victim of this industry’s deceptive marketing practices, bring your claim to Trantolo & Trantolo’s product liability lawyers today.

Please Share This
Read Previous Article:
« A Word to the Wise: Let Us All Remember…
Read Next Article:
Purdue Pharma Files for Bankruptcy »