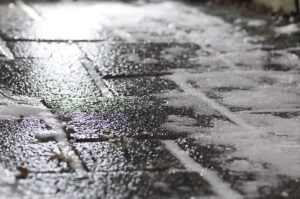 Trantolo & Trantolo’s team of trial lawyers represents slip and fall cases occurring in Connecticut, and in May, Atty. Keith Trantolo reached a $480,000 settlement concerning an incident in New Britain.

In the claim Carmen Correa v. John Moneymaker, et al, the plaintiff had gone to Obsessions Beauty Salon in a New Britain shopping plaza in 2011. After initially entering, she left to return her coat to her car, concerned about the fumes causing damage, but upon returning, Correa slipped on the curb because of ice and snapped her left femur as a result.

Correa had been sent to the hospital, where she immediately underwent surgery. At the same time, her son returned to the site of the fall to take pictures, which revealed the area had dirty ice with debris – an indication the hazard had been present for quite some time.

After surgery, Correa spent 107 days at a rehabilitation facility, but her injury healed at an angle, which required a second procedure. Correa followed this with 88 more physical therapy sessions. Her total expenses for 22 months of treatment came to $172,615.

As well, Dr. Bruce Browner of the University of Connecticut Health Center diagnosed Correa with a 25 percent permanent disability rating, as she needs a cane and requires custom footwear to make up for a quarter-inch difference between her left and right legs.

Moneymaker managed the property where the fall occurred but contracted Patriot Property Maintenance for snow and ice removal. However, a new lease agreement specified store owners to be responsible for shoveling their sidewalks. As a result, most pushed the ice and snow back into the parking lot after Patriot plowed the plaza.

According to statements made by Atty. Trantolo, Moneymaker should have told store owners to properly shovel their sidewalks and should have had Patriot fully remove all accumulating snow and ice.

The case went to mediation, where the defense claimed that Correa’s artificial knee joint – from a previous procedure – exacerbated the injury’s severity. Dr. Browner, however, confirmed that this pre-existing condition had no influence on her more recent injury.

After one day of mediation, all parties reached a settlement: $460,000 from Moneymaker and $20,000 from Patriot Property Maintenance.