A Word to the Wise: Dangers of Speeding

By: Chick Pritchard, Director of Communications 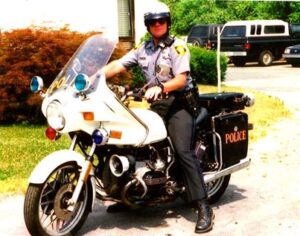 I never thought someone would die in my arms that day. It was early May, the flowers were starting to bloom, the day was forecast to be mild and sunny, and all was well with my world. I would be assigned to the police motorcycle today and I loved that fact. I had been riding a motorcycle since I was 16 years old and now, I rode one as a police officer and actually got paid for it!

Our morning roll call was pretty normal. My squad was made up of a lot of men and women who had accumulated quite a few years in law enforcement, and most of us were not loving early morning in the squad room, listening to the sergeant report on stolen cars, missing persons and wanted people to watch for. Happily, one of the rookies brought in coffee and the world was all good again.

I never ran radar on the motorcycle, but when I saw someone going beyond what I considered acceptable speeds, I often stopped the vehicle for a conversation and a verbal warning. Back in my day, we only gave written warnings for equipment violations and my mental speed estimates surely did not fit that category.

I always paid special attention to motorcycle riders, especially younger ones. The road was sometimes still covered with leftover winter sand, which made riding a bike a little more dangerous. I was young once and I remember the love of speed I experienced as a new motorcycle rider on my first Triumph 650. I was pretty foolish at times.

I saw the oncoming Harley approaching. It was a beautiful bike and the rider was fully dressed for the day, with good leathers and a black helmet. We were in a 45 mph zone and he went by me doing around 60. He waved and, as he saw me turning around and activating my emergency lights, he quickly pulled over and was taking off his helmet and gloves as I approached.

He was a young man in his early 20s, who had been riding for 4 years and with a smile, asked what would I have done if he hadn’t stopped. I advised that he couldn’t out-run Motorola and we both laughed. He admitted to the excessive speed on his new bike and I told him I was giving him a verbal warning, with the hope there would not be a next time. We both got back on our bikes and bade each other goodbye.

About 5 minutes later, I was dispatched to a motor vehicle accident with injuries. As I approached, the first thing I saw was the bike. It had slid along a path of sand in the road and was lying in a puddle of oil and gas. Then I saw a boot that was in a tree. Then a young man, covered in blood, crumpled and lying on the side of the road. I ran to him, as I heard other sirens screaming in the distance. He was still alive, barely, and paramedics arrived as I was holding him. He died before they could provide any assistance that might have saved his life.

May is Motorcycle Safety Awareness Month

During this month and throughout motorcycle season, let’s be especially aware of the dangers of speeding.