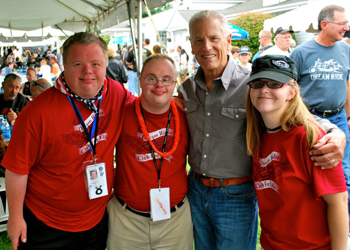 Announced earlier this year, the 2013 Dream Ride Day is scheduled for August 25, with satellite events starting as early as August 16. The Hometown Foundation and Bozzuto’s are sponsoring, and Trantolo & Trantolo is a presenting sponsor.

Since the annual event’s start in 2001, Dream Ride Day has raised $1,725,000 for thousands of Special Olympics athletes. Although participants convene for the main event in Connecticut, funds are raised on a state-by-state basis and go to the athletes’ locations. Even though weather canceled the 2012 event, Dream Ride Day still raised $270,000 last year.

Aside from the main ride itself, Dream Ride Day includes the Dream Cruise, an occasion for riders to show off their vehicles and drive with a Special Olympics Athlete into the event. Papa’s Chrysler Dodge Jeep Ram is presenting.

For 2013, the event is partnering with the Law Enforcement Torch Run for Special Olympics. Known as the largest grassroots fundraiser and awareness campaign, it involves 85,000 volunteers yearly from 40 countries, 12 Canadian provinces, and all 50 U.S. states.

The August 25 event will be held at The Farmington Club in Farmington, Conn., with registration beginning at 9 a.m. The ride itself promptly starts off at 11 a.m. If you have yet to register, purchase your ticket before the event here.