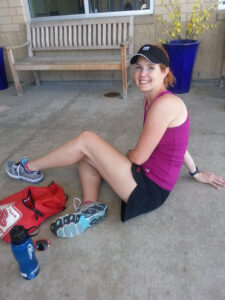 The Trantolo & Trantolo law firm is known, to its clients and within the legal community, for its dedication and commitment to success. One of the firm’s litigation paralegals, Anne Ciccio, exemplifies these qualities every day, as she works hard on behalf of clients. She also demonstrates them in her personal life as she has been preparing to race in the New York City Marathon.

Anne, has been helping Trantolo & Trantolo clients for 7 years, as a paralegal. She is known by clients and staff for her absolute commitment to success and dedication to hard work. She brings this same passion and enthusiasm to her running, which began for her in a 5K Race held on St. Patrick’s Day, 2009. Through the intervening years, Anne has participated in numerous races, including 5 mile runs, such as the Thanksgiving Turkey Trot. Anne has also competed in half marathons, such as the Amica Iron Run. This avid athlete has wanted to participate in the NYC marathon since 2012, and has been preparing for this very special day all year. For the last 18 weeks her training has included a schedule of running the roads before the sun rises on the morning times. She has run six out of every seven day during these last several weeks, as she intensified her rigorous preparation for this 26.2 mile challenge. “There have been a lot of long miles, but I love competing against myself.” Anne loves the “sense of personal accomplishment” she feels at the end of every competition. “There are a lot of lonely miles, but running gives me a tremendous sense of calm, and accomplishment. I love that.”

The first New York City Marathon was organized in 1970 and was held entirely in Central Park. Of 127 entrants, only 55 men finished. This year thousands of runners will come together, on Sunday, November 2nd to challenge themselves, and one another. Trantolo & Trantolo’s own Anne Ciccio will be one of them.

Trantolo & Trantolo knows well the sense of accomplishment which comes from passionate dedication.. Congratulations to Anne Ciccio, as she “Toes the Line” in this year’s NYC Marathon. Everybody is very proud!