Why Lane Splitting Is So Dangerous

Many motorists have heard that lane-splitting is dangerous. Lane-splitting, the practice of a motorcycle driving in between two lanes of traffic, is illegal in some states, including Connecticut. Yet, during the warmer months, you’ll frequently catch other riders doing this get somewhere quicker or avoid the gridlock.

But, how unsafe is lane-splitting? According to statistics, one-fifth of all motorcycle accidents stem from this practice. Yet, not all states have outlawed it, including California. What should you be aware of?

The Faster the Speed, the Greater the Risk 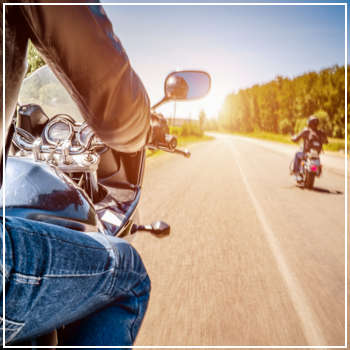 According to data from a UC Berkeley study, motorcyclists going at the same speed as the rest of traffic don’t see their accident risks increase when they lane-split. Rather, that factor starts to climb once they go 10 MPH faster than other motorists.

Yet, a sizeable percentage of motorcyclists do engage in this behavior. Out of those analyzed, 20.5 percent say that when they lane-split, they travel 15 MPH or more than the surrounding traffic. Another 32.9 percent do it when other cars come to a standstill and another 31.5 percent will lane-split in stop-and-go conditions.

The same UC Berkeley study found that, when accidents happen directly because of lane-splitting, the motorcyclist is more likely to rear-end another vehicle than to be rear-ended.

For those that get involved in accidents, which encompassed 2.6 percent of all lane-splitting riders, 34.6 percent struck a side mirror. Another 11.1 percent had minor injuries and 9.9 percent experienced severe injuries.

Lane-splitting riders were less likely to experience torso and head injuries, but that doesn’t make the practice any safer. In fact, should an accident happen, you’re more likely to be thrown off your bike and in front of or behind the wheels of a vehicle in either adjacent lane.

The study also found that lane-splitting accidents increase during commute times. During the morning and afternoon rush hours, 14.9 percent out of this group hit another vehicle or were hit themselves. An additional 45.2 percent nearly hit another vehicle.

As we’ve pointed out before, you also need to consider the perspective of other drivers on the road. For one, another car isn’t expecting to see a motorcycle driving between two lanes of traffic, even if everything has come to a complete stop. Second, even if you believe you’re taking precautions, you may still end up in a driver’s blind spot. As a result, should that driver go to change lanes, you’ll end up colliding with the back of their car.

In short, even if you find yourself driving in another state, lane-splitting is an extremely risky practice that can seriously compromise your safety. Saving a few minutes on the road isn’t worth colliding with a car or falling off your bike.

If you do experience an accident on the road, Trantolo & Trantolo is here to help you recover fair compensation for your injuries. Our team is not only knowledgeable about this field of law – many of us ride, too. To present your claim, contact us today.