Each year, about 5,000 passengers on board a bus or other form of public transit suffer a slip and fall injury. Some might be related to the vehicle’s condition and others might stem from driver recklessness but in all cases, it’s imperative that you start your claim right away. 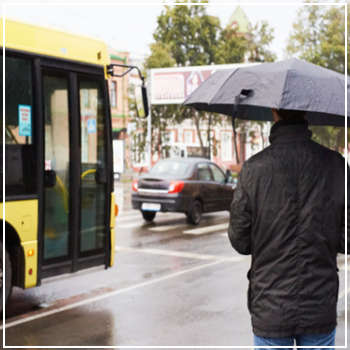 Depending on where you are located, the following vehicles may fall under the scope of public transit:

The key factor in your claim is knowing who owns and operates the vehicle. If a town, county or state manages the enterprise, rather than a private company, the vehicle falls under public transit.

Injuries frequently concern wet and slippery floors, trip hazards from not cleaning the vehicle, loose railings and bunched-up carpeting. Once these factors are considered, your claim may further involve the business or person responsible for maintenance, including the driver, the transit company or a third-party entity hired for inspections and repairs.

As a passenger filing a claim against a transit company or the municipality that owns it, you must establish liability and prove negligence related to the incident. Meanwhile, the defendant needs to show the company or driver stayed within the lines of reasonable conduct.

Generally, the town or city operating the transit company oversees vehicle maintenance and how drivers are trained. Once additional factors are involved, your case can become more complicated.

Complications of Your Claim

Let’s say rain gets tracked onto the bus and the floors clearly look wet and slick. It’s assumed that because the floors appear to be an obvious risk, passengers should know to avoid them. In addition, the driver should not be expected to clean the floors after every stop.

Beyond wet floors, if the rain poses a hazard to those entering and exiting the bus, the driver has a duty to:

Floor moisture and dampness are not always related to the weather conditions. Rather, a passenger may spill a drink on the floor or a leak might form on one train car. In these instances, the driver may not be aware of the issue right away and therefore cannot fix it in a reasonable amount of time. As such, a claim may factor in:

Most states subject public transit companies to “common carrier law,” which may further extend to school buses and private entities. In all cases, the common carrier owes its passengers a higher degree of care than an average person would exercise and should reasonably take care of its passengers, even in the event of an injury. In this case, “reasonable” indicates creating safe means and methods for transit – not an injury-prone environment. Depending on the state, this duty may extend beyond the vehicles themselves to any injuries that occur in a train station or subway platform.

Yet, common carrier laws do not supersede the need to prove negligence and what’s reasonable for the transit company may often be circumstantial. For example, rain or slippery floors may seem clear cut, but what if a driver must swerve or stop short? You might have fallen, but if the driver had to stop suddenly in the street for a pedestrian, he or she is still seen as taking reasonable care to avoid an accident. But, if your injury happened while the driver was talking on a cell phone, speeding or behaving in an otherwise reckless manner, common carrier laws indicate that he or she is creating an unsafe environment for those on the bus.

Because most public transit companies are government-run organizations, you need to file your claim within a certain period – 60 days to six months. Also consider that:

Because of the short window to file, it’s necessary that you find a slip and fall attorney right away to get the process going. If you recently sustained an injury on a public vehicle in Connecticut, bring your case to Trantolo & Trantolo. To speak with us about your claim, contact one of our four Connecticut locations today.