Why the spike in numbers? The NHTSA attributes it to distracted driving. No matter the reason, pedestrians hit by a car are 1.5 times more likely to be killed than the vehicle’s occupants, so this increase is a serious safety issue.

For 72 percent of accidents involving pedestrians, the conditions are similar: At night, in an urban area and on an arterial road, rather than at an intersection. Beyond these big-picture commonalities, the following factors increase your risk of being struck. 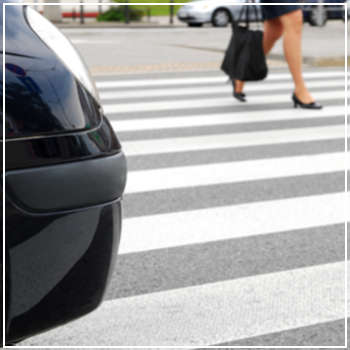 Figures show that pedestrians at both ends of the age spectrum – children and the elderly – are more likely to get hit by a vehicle. Data from AARP indicates that individuals over age 65 have a greater chance of being struck and killed. Out of all related fatalities, 20 percent involve senior citizens.

While these statistics are alarming, those in between are not exempt from injuries or death. For related emergency room treatments, those 15 to 29 years of age compose the largest group.

The faster you drive, the greater your chances of losing control and hitting another vehicle or damaging property. In pedestrian accidents, speed literally kills. According to a study by the London Department for Transportation, the difference from 30 to 40 mph increases accident-related fatalities. Supporting these findings, 60 percent of fatal pedestrian accidents involved a driver going 40 mph or faster.

By using the crosswalk, many pedestrians assume that drivers will automatically stop. However, figures from the U.S. Federal Highway Administration indicate that pedestrian-related conditions remain the same, regardless of whether a crosswalk is used. On roads with two lanes and a crosswalk, motorists appear more likely to hit a pedestrian than if the individual crossed a road without one.

Plenty of campaigns illustrate the dangers and damage related to drinking and driving. But, almost none touch on the risks of drunk pedestrians walking around and attempting to cross a road at night.

How serious is it? Figures from NHTSA show that 34 percent of fatal crashes involved a pedestrian with a BAC of at least 0.08 grams per deciliter (g/dL). About 15 percent involved a driver in a similarly drunk state.

Distracted behavior behind the wheel and on the pavement may produce disastrous, if not fatal, results. Although no definite figures are known, inattentiveness related to texting, talking on the phone or changing the music decreases driver and pedestrian focus. As such, the chances of going through a stop sign, hitting someone at a crosswalk or walking into a moving car increase.

Along with the use of electronics, simply not paying attention to pedestrians or cars on the roads can inevitably lead to accidents:

Not being able to see someone walking alongside or crossing a road increases the chances of an accident. Weather is a primary culprit, from fog and rain obscuring the road ahead to slippery conditions created by ice and snow. Particularly during wintertime, a driver may not be able to slow down by the time he or she notices a pedestrian.

Regardless of season, poor visibility remains a possibility. You could be driving on roads with poor lighting and miss a pedestrian wearing dark-colored clothing.

If you’ve been hit by a driver and sustained life-threatening injuries, you may have a personal injury case. To discuss your claim with a lawyer, give us a call today.