When we hear about a car accident, many of us envision two cars colliding with each other. However, according to crash data from IIHS, single-vehicle crashes account for over 50 percent of all accidents. While these incidents often involve hitting a stationary object such as a guardrail or a pole, they can encompass several other scenarios. For instance, crashes involving parked cars, rollovers and animals crossing the road.

With this information in mind, causes of single-vehicle accidents do overlap with those of two- and multi-car crashes. To raise awareness, we’ve listed 10 common scenarios. 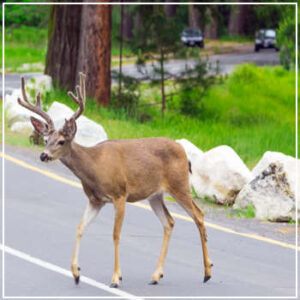 In general, speeding increases the odds you will collide with something or someone. With single-vehicle accidents, you further risk getting into a rollover crash. According to the NHTSA, 85 percent of rollovers are single-vehicle crashes, with speeding or alcohol playing a role.

Speeding encompasses more than driving above the posted speed limit. Going too fast for the road conditions – ice, fog, heavy rain and snow – also increases your chances of an accident. In bad weather conditions, you also risk spinning out around a curve or hydroplaning.

Getting behind the wheel after drinking alcohol makes you a hazard to everyone on the road. Particularly concerning single-vehicle crashes, the Department of Transportation found that your risks increase 30 percent compared to a sober drivers, as those under the influence are more prone to speeding, swerving and losing control.

Whether using a cell phone or adjusting the radio, distracted driving increases your chances of a single-vehicle crash. In general, you’re more likely to drift off the road as you engage in these habits. In the process, you might hit a parked car, a median or barrier, or adjacent property.

The parts that stop and control vehicle operations may fail at crucial moments, causing you to crash into a stationary object. It’s a frightening scenario no one wants to live through. Including part and operational defects, poor auto maintenance and rate mechanical malfunctions, the driver’s fault and subsequent claims are directed to the car manufacturer, parts maker or mechanic.

5. Running Off the Road

From debris to vehicle parts and items that fell off a truck, you may swerve to get out of the way of objects in your path. Unfortunately, as you’re maneuvering around these obstacles, you may end up hitting another object. Based on statistics from the NHTSA, losing control, running off the road and colliding with a median or guardrail is the most common cause of single vehicle crashes.

Freezing temperatures and snowy or icy conditions can make the roads treacherous. As such, motorists could slide into a stationary object or slip off the road. Poor roadway quality, including potholes and insufficient lighting, can worsen slick surfaces and low visibility.

However, bad weather is not restricted to winter. Come spring and summer, sun glare can make it hard to see other vehicles ahead or obstacles in the road. Once autumn arrives, windy conditions can litter wet leaves on the road and cause your tires to lose traction.

Getting behind the wheel without enough sleep can be deadly to yourself and other motorists. AAA highlighted how this can be especially dangerous around daylight savings time, but it’s a year-round issue.

When driving drowsy, there’s a high likelihood of crashing into an adjacent object like a barrier, guardrail or someone’s property.

Naturally, recently licensed drivers have higher single-vehicle crash risks. Oftentimes, these accidents happen when the motorist is navigating around a pothole, surprised by an animal or hits a patch of slippery pavement. Many experienced drivers know how to react in these situations, while a relatively new driver may slam on the brakes or oversteer the vehicle. Cell phone use and speeding, common issues among teen drivers, only exacerbate these risks.

Especially at night, you never know when a deer will suddenly cross the road, right in front of your car. You may have no time to react and hit the animal or swerve across the road into another object. To reduce your accident risks, always scan the shoulder of the road for animals and be ready to slow down.

When driving on the highway, we often see objects that have flown off a truck bed or remnants of blown tires alongside the road. If an object from another vehicle suddenly appears in your path and you swerve out of the way, there’s a chance you’ll collide with a stationary object instead.

For these instances that can come out of nowhere, know we are here for you. Trantolo & Trantolo will be on your side against a city that’s denying poor street maintenance or a trucking company that claims its tarp was secure. To speak with a car accident attorney, give us a call today.