Collecting Evidence for a Medical Malpractice Case: What You Should Know

Medical malpractice cases have earned a reputation as being long and complicated and a large part of that assumption comes from the collection of evidence. Occurring during the “discovery” phase, the lawyer and plaintiff work to gather relevant medical records and history, including the identification of witnesses who are knowledgeable about the incident. 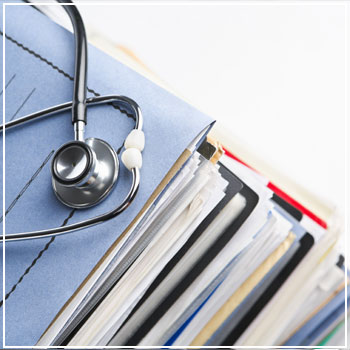 During the case, the following evidence may be gathered:

One of the most crucial pieces of evidence, a patient’s medical records give a more comprehensive picture of his or her condition. As a result, it’s recommended that, early in the case, the plaintiff and lawyer obtain the records as soon as possible.

However, records can sometimes be expensive to procure and a firm may spend thousands of dollars printing out pages.

Additionally, records can indirectly show where something went wrong. Specifically, parts may be lost or omitted – intentionally or not.

Deposition testimony from doctors or nurses may fill in some medical record gaps, but could also contradict what’s in a patient’s medical records.

In medical malpractice cases, the lawyer needs to prove that the doctor deviated from the accepted standard of care and that their actions were directly responsible for the plaintiff’s injuries. Yet, as it can be difficult to prove what the standard of care is, a lawyer often turns to medical journals and articles as evidence. These documents can reveal how a condition should be treated and may further contradict the doctor’s statements.

Depending upon the nature of the case, you may be required to have expert testimony showing if and how the defendant breached the accepted standard of care and how that affected the patient. This portion may be complicated, as other medical professionals may not want to testify against one of their peers for fear of retaliation.

Additional evidence could be presented, such as medical bills and insurance records, indicating the expenses related to the resulting injuries.

After everything is gathered, each attorney then asks to see copies of the medical records that may be presented against the other side, along with any medical articles used. As the plaintiff, be prepared for the doctor’s insurance company to dig up information about past car accidents, workers’ compensation and other injuries to attempt to prove your condition was pre-existing or related to another incident.

Do you believe you were a victim of medical malpractice? If you’re within the two-year statute of limitations, bring your claim to Trantolo & Trantolo’s experienced lawyers.