Why You Should Remove Snow from Your Car Before Driving

As you start your morning commute, you discover that a few inches of snow fell the night before. Not only that, but morning dew has coated it with ice, freezing it to your car’s surface. You’ve got to hit the highway or you’ll be late! In a pinch, you scrape off your windows for enough visibility, but ignore the roof and trunk, believing it will melt off on the way to work.

Unfortunately, the “melting” that occurs on the road creates a major hazard for you and other drivers, reducing visibility, sending projectiles behind and increasing your likelihood of getting into an accident. If you think that skipping this step in the short term will help you in the long run, think again! 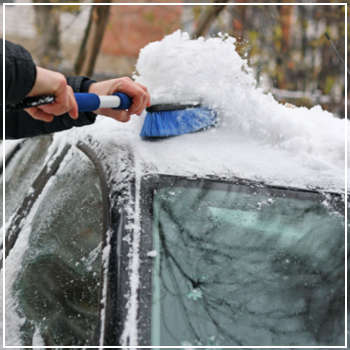 In many states, including Connecticut, neglecting to clean the snow off your car before driving is illegal. As a result, depending on where you’re driving, you could be faced with fines for posing a hazard or damaging property.

In Connecticut, drivers are required to remove all snow and ice from their vehicle’s hood, windows, trunk and roof to the point it no longer poses a hazard. In Connecticut, General Statute Section 14-252(a), passed in 2010 and updated in 2013, applies to both personal and commercial vehicles. What can happen when you don’t clear off your car?

Keep in mind that, once a driver pays the fine, he or she is still responsible for the cost of any property damage or injuries to other motorists.

However, under Connecticut law, a driver isn’t responsible for snow or ice accumulation on his or her vehicle under the following conditions:

Were you injured after another driver failed to sufficiently clean off his or her vehicle? As you recover from your injuries and deal with an insurance company that won’t fairly compensate you in the aftermath, get assistance from Trantolo & Trantolo’s car accident lawyers. To learn more, contact us today.

Please Share This
Read Previous Article:
« Dangers of Medication Errors in Nursing Homes
Read Next Article:
The Dangers of Using a Cell Phone While Driving »