How Dangerous Is It to Drive Without a Seat Belt?

Many people believe that “buckling up” is the first logical step before driving off. Yet, as a recent New York Times article reveals, unintentional injuries in car accidents are the most common cause of death in children under 15 years of age. How do seat belts factor into this statistic? Data shows that, out of all car accident-related deaths, 43 percent of children were not buckled in.

Although some claim that seat belts are also responsible for injuries, they’re essential to wear for several reasons. Consider the following points, you next time you question whether or not to buckle up.

1. Safety in the Event of an Accident 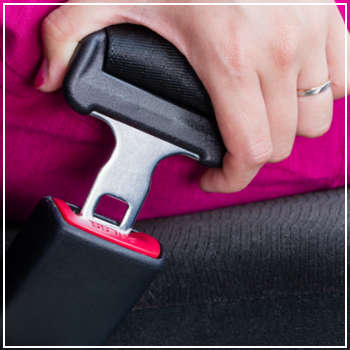 Data shows that when a seat belt is correctly worn, it reduces the risk of fatal injuries for front seat occupants by 45 percent and moderate-to-critical injuries by 50 percent. For those in the back, rear seat belts reduce fatalities by 73 percent.

Yet, even with these benefits known, drivers and passengers continue to not wear them. As a result, out of the 22,441 passenger vehicle accidents in 2015, more than half of all teens and adults were unrestrained in the collision. Who’s more likely to not buckle up? While adults ages 18 to 34 and men are less likely to use a seat belt, teens are most commonly seen without their seat belts on.

Since 1994, seat belt usage has continued to increase. As of 2017, drivers buckle up 16.5 percent more often than they did over 20 years ago, which is a step in the right direction.

According to the National Highway Safety and Traffic Administration (NHTSA), there is a correct way to wear a seat belt in order to prevent injuries. The shoulder strap should go across your chest and away from your neck – not behind your back or under your arm. The lap belt needs to go across your hips and be below your stomach. The belt should not be uncomfortably tight, but it should not so loose that you can move around in it.

5. Seat Belts and Airbags Don’t Cancel Each Other Out

Some drivers believe that if their car has working airbags, they don’t need to wear seat belts in the event of a crash. While airbags provide supplemental protection, there is a chance you could slide underneath if not wearing a seat belt. Additionally, airbags don’t help during side, rear impact and rollover crashes. Instead, a seat belt prevents you from flying out a window or getting knocked around inside the vehicle.

6. Seat Belts Still Have Potential to Cause Injuries

By design, a seat belt reduces fatality risks, but several factors could lead to injuries, including:

However, compared to the injuries you could sustain without wearing one, those from a seat belt are relatively minor. A passenger may experience scrapes and bruising, internal injuries to the abdomen, spinal cord, shoulder, neck or sternum injuries, fracturing, dislocation or internal bleeding.

7. What About Fire and Water?

In the event your car catches fire or gets submerged, do you believe that not wearing a seat belt makes you safer? This is an inaccurate assumption, as the impact from the accident could knock you unconscious and prevent you from exiting the vehicle. Also, for this small percentage of accidents, it’s easier to be conscious and unbuckle yourself to escape.

What if your insurance claim after a car accident ends up going to court? Should it be discovered that you weren’t wearing a seat belt at the time of the collision, even if you weren’t responsible for the accident, your damage award may be partially reduced.

Are you recovering from a car accident and your insurance company just won’t cooperate? Instead of taking the financial loss, work with Trantolo & Trantolo to get the compensation you deserve. To learn more, contact us today.

Please Share This
Read Previous Article:
« How Proposed Medicaid Cuts Could Affect Nursing Homes
Read Next Article:
What to Know About Antipsychotic Use in Nursing Homes »