After you get into an accident with another motorist, you may have an idea of what happened and the next steps you’ll need to take. Yet, when the vehicle that hits you is a semi-tractor trailer, the situation can suddenly become more complex.
Generally, truck accidents encompass three broad categories:

According to the Federal Motor Carrier Safety Administration (FMCSA), truck accidents have increased over the past decade. They typically cause more harm than ordinary motor vehicle collisions – especially to passenger vehicles. As an example, truck accidents are behind 5,000 fatalities for those in passenger vehicles and just 700 in semi-trucks. For roughly two-thirds of these fatalities, the truck driver had been pulling along at least one trailer.

Within these three general groupings, more specific factors may be the reason behind your accident with a tractor trailer truck. 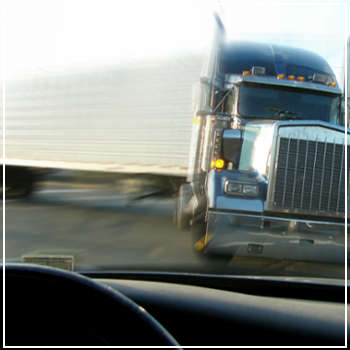 This includes both illegal and prescription drug use. According to the Federal Motor Carrier Safety Administration, drug use is the most common cause of truck accidents, overtaking fatigue. In fact, drugs were behind over one-quarter of all truck accidents. Of this total, over-the-counter medications affected the driver’s reaction time and thus, contributed to the collision in 18 percent of all cases.

A close second, drivers who speed on the highway cause about 23 percent of all truck accidents. Unlike with two cars, weight and size play key roles in the damage caused. An 80,000 lb. truck simply cannot brake as quickly when the driver is traveling at high speeds and, as a result, any injuries and property damage will be significantly greater.

In truck driving school, students learn to regularly check blind spots and all sides of a vehicle before making turns. Yet, it’s estimated that neglecting this safe driving behavior is responsible for almost 15 percent of all accidents.

Statistics further attribute truck accidents to not using a turn signal to change lanes, distracted driving and other illegal driving maneuvers. Even when a truck driver’s technique is perfect, he or she still needs to be alert to surrounding vehicles. Figures indicate that most 81 percent of truck accidents can be traced back to an adjacent passenger driver’s behavior.

Believe it or not, driver fatigue is responsible for fewer than 13 percent of all truck accidents but the National Highway Traffic Safety Administration continues to warn of its prevalence. Because many drivers get paid by the number of miles driven, sometimes they will forgo sleep to finish off a route. Federal regulations limit the number of hours a truck driver can be on the road per day and require truckers to take breaks, but some may break this rule, which poses a risk to other drivers.

A truck that’s poorly maintained – including old brakes, worn-out tires, a malfunctioning engine and improperly attached trailers – turns into a safety hazard once the driver starts a route. As more and more companies place maintenance costs on the driver, some truckers may avoid repairs until the last minute. To comply with federal regulations, truck companies must regularly conduct maintenance – down to examining brakes before a route begins.

Some newly licensed drivers – or those without adequate training – are eager to get out on the road, and trucking companies are frequently willing to hire them for the lower pay. However, someone less familiar with a specific type of truck can have a harder time handling it and has a greater accident risk.

An individual may be a great truck driver, but there’s still a chance the cargo in the back trailer was loaded incorrectly. Whether a driver or workers at a facility loaded the vehicle, improperly distributed contents can make the vehicle harder to control and increase the possibility of jack-knifing.

Were you recently involved in a truck accident? As you recover and deal with an insurance company that won’t pay for your injuries, get the process moving with Trantolo & Trantolo. Work with our team of motor vehicle accident attorneys to receive the compensation you deserve. To learn more, give us a call today.

Please Share This
Read Previous Article:
« A Word to the Wise: “March Madness” Is About More Than Basketball
Read Next Article:
How Dangerous Are Trampoline Parks? »