How Does Wrong-Way Driving Happen?

Imagine you’re driving home after a long day of work when suddenly, a car driving in the opposite direction is headed right toward you. You react as quickly as you can, moving out of the way for the motorist – but not every driver is as lucky. Wrong-way driving makes up a small percentage of all motor vehicle accident statistics, but it has one of the highest fatality rates of all potential causes. 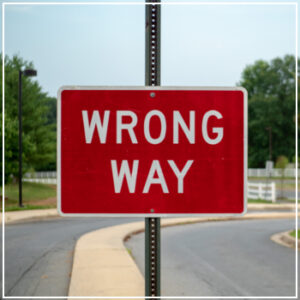 These crashes happen when a driver goes in the opposite direction of the traffic flow. The National Highway Traffic Safety Administration’s definition applies to crashes on controlled-access highways only and does not factor in crashes related to median crossovers. These instances include:

Yearly, roughly 350 individuals die from wrong-way driving accidents, making up three percent of the total. Although this number seems small, the probability rate of fatality is 1.34 per crash versus 1.1 for the typical accident, according to figures from the National Transportation Safety Board. As a result, wrong-way accidents are some of the most dangerous situations on the road.

In the majority of cases, these accidents can be attributed to human behavior, rather than outside factors.

The NTSB conducted a study to examine data involving wrong-way accidents for common trends. In general, older drivers – specifically, individuals 70 and older – got into the largest percentage of crashes. Although there’s no direct correlation between age and accidents, researchers speculate that deteriorating eyesight makes it harder to read signs, thus increasing the chances a driver travels in the wrong direction.

The NTSB’s data indicated that wrong-way collisions frequently occur at night – the time exhausted, intoxicated drivers are out on the road and darkness decreases the visibility of essential signage. Specifically, nearly 80 percent of all wrong-way crashes occur between 6 p.m. and 6 a.m., and frequently fall on the weekend.

Anywhere from 50 to 75 percent of drivers at fault for wrong-way crashes are intoxicated. Those stopped by police had a BAC of at least .15 – twice the legal limit.

When a driver is unfamiliar with an area, is not paying attention behind the wheel or gets distracted by a passenger, he or she might start to travel in the opposite direction. These behaviors may look like:

Yet, drivers don’t always bear the brunt of the blame. Instead, poor traffic design where drivers can’t understand the signage may be behind frequent crashes:

To combat these factors, cities have instituted various measures to help drivers, including:

When these incidents occur, injuries are often similar to those sustained in head-on collisions. Victims frequently require surgery and extensive rehabilitation for their injuries, which may include:

Were you the victim of a wrong-way driver and now your life is irreversibly changed? Rather than accept the situation or deal with an insurance company that places blame on you, work with Trantolo & Trantolo to get the compensation you deserve. To speak with a car accident lawyer, give us a call today.