When your children are old enough to ride in the car without a booster seat, you likely teach them how to buckle their seat belt. Although it’s the law in Connecticut for all passenger vehicle occupants to wear a seat belt, these safety restraints are not found in our state’s school buses. When we hear about school bus tragedies, such as the Chattanooga crash in 2016 that killed six young children, the lack of safety restraints comes into question. We explore the reasons why seat belts are not required in Connecticut school buses. 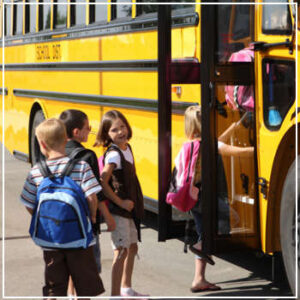 According to the National Highway Traffic Safety Association (NHTSA) buses over 10,000 pounds are safe for travel without restraints. Those that do not reach this weight limit must be equipped with lap-shoulder belts.

Are Buses Safer Than Cars?

Buckling our seat belts in cars – which weigh much less than 10,000 pounds – reduces fatality risk by 45 percent. For light trucks, seat belts reduce this risk by 60 percent. In both passenger vehicles, chance of moderate to critical injury is also reduced by 50 – 65 percent.

According to the National Safety Council, buses are 40 times safer than the average family car. Passenger vehicles sit low to the ground and cannot absorb the impact of another vehicle as effectively as a school bus.

In the event of a car crash, a child could be killed by the airbag or ejection through the windshield. On a school bus, the seats are cushioned and placed close together – a technique school bus designers call “compartmentalization” – to absorb crash impact.

How Often Do Fatalities Occur?

According to the NHTSA, about 24 million children are transported by public school bus over 4.3 billion miles each year. During these trips, only 4 to 6 children die in bus accidents. On the other hand, about 800 kids die walking, biking or being driven to school in a car each year.

A University of Alabama study revealed that seat belts on buses would reduce the number of kids accommodated per row. As a result, each school would have to increase it’s bus fleet by about 15 percent to bring the same number of kids back and forth from school.

NHTSA studies have found that adding seat belts to buses would be a huge expense that’s simply not necessary. It would cost each state millions of dollars to upgrade these large vehicles, which are already considered safe.

“Most school bus passenger fatalities are because the passenger’s seating position was in direct line with the crash forces, and seat belts would not have prevented these fatalities,” said Ron Medford, former Deputy Director of the NHTSA.

At Trantolo & Trantolo, we have a dedicated team of personal injury attorneys who will fight for the compensation you deserve. If you’ve been hurt, Let Our Family Help Your Family™.

Please Share This
Read Previous Article:
« Is It Safe To Ride a Bicycle In Traffic?
Read Next Article:
Why Gather Evidence For a Car Accident Claim? »