In today’s busy world, we are often in a rush to get from Point A to Point B. Unfortunately, this reality can be dangerous for our kids. In Connecticut alone, thousands of children take the bus to school every day. When drivers are in a hurry to get to their destinations, it puts students waiting for the bus and crossing the road at risk.

Although all 50 states have “stop-arm laws” against passing stopped school buses, they can often be underenforced and disobeyed. According to the National Highway Traffic Safety Administration (NHTSA), stop-arm refers to the stop-sign shaped “arm” that extends from the left side of a bus when its red lights are activated.

The Law in Connecticut 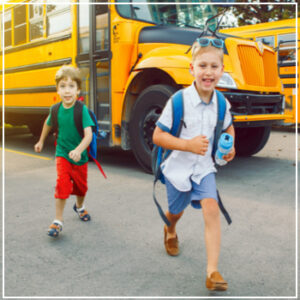 In Connecticut, drivers must stop at least 10 feet away from a school bus and cannot proceed until the bus has retracted the stop-arm and deactivated the red flashing lights. It’s illegal to pass a stopped school bus that is loading and unloading children.

When a bus activates its yellow lights, drivers should slow down and be prepared to stop. Once the red flashing lights are activated and the stop-arm comes out, traffic on either side of the roadway must stop. On a divided highway, only vehicles behind the bus are required to stop.

According to Connecticut’s General Statutes, there is a $450 fine for the first offense of passing a stopped school bus. Subsequent offenses may result in a $500 to $1,000 fine, up to 30 days in jail, or both.

Stop On Red, Bus Ahead

The number one reason why drivers pass school buses is because they are in a hurry. We often see drivers passing other motorists on the left as they make right turns, rather than waiting behind the stopped vehicle. This can be a safe driving maneuver, as long as there is no oncoming traffic on either side of the road.

When a school bus is stopped, it is never safe to pass. The law is to stop your vehicle, wait until the flashing lights deactivate and all students have safely boarded or exited the bus before proceeding with caution. A driver should always assume there may be children crossing the street near a stopped school bus. Never pass on the left when the stop-arm is out.

Distracted driving is another factor that contributes to many school bus stop accidents. This August in Pinellas County, Florida, more than 600 illegal passes were recorded in one day using 360-degree cameras outside the bus to view road activity. Howie Miller, a deputy for the Pinellas County Sheriff’s Office, averages “four to six citations every two days just for passing a stopped school bus.”

The NHTSA has stop-arm compliance programs in place to reduce the number of youth injuries and fatalities at bus stops. As motorists, we can help the cause by obeying school bus laws and remaining alert behind the wheel. You never know when a child may dart out into the road, so it’s better to be safe than sorry you illegally passed a stopped school bus.

If you or a loved one has been involved in a school bus stop or other pedestrian incident, start a claim with Trantolo & Trantolo’s experienced attorneys today.

Please Share This
Read Previous Article:
« Disease Outbreaks in Nursing Homes
Read Next Article:
A Word to the Wise: Let Us All Remember… »